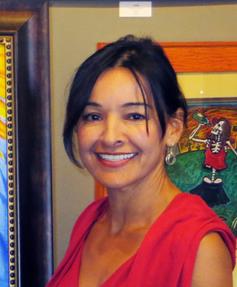 Her work has also been published in the books, Contemporary Chicana and Chicano Art:  Artists, Works, Culture and Education; Triumph of Our Communities; and Chicano Art for Our Millennium, printed by Arizona State University and The Bilingual Press.

In 2012, Aydee gave permission to use her painting, “In the Company of Great Spirits” for the cover page of the poetry book entitled, In the Company of Spirits (an adaptation from Aydee’s original painting) by Washington D.C. poet Carmen Calatayud.

In 2013, Aydee’s art graced the cover of author Sylvia Mendoza’s book entitled, The Book of Latina Women:  150 Vidas of Passion, Strength and Success.

This year, Aydee will be working with another author, Jose Chavez, on a children’s book of poetry, due to be published by the Summer of 2016.Type your paragraph here.

Aydee believes she became an artist the day she arrived in America.  She was four years old then but the stark contrast between her grandparent’s home in her beloved Teocaltiche and her new home in Cypress Park, California was never lost on her, despite her young age.  Over time, she began viewing her memories of those first years in Mexico as dreams that juxtaposed the reality of a strange and exciting new world in America.  She adapted well to her new surroundings and learned that she had a gift to weave her memories into how she viewed the world through her paintings.  Lopez Martinez has been painting her memories ever since.

Aydee studied fine art and received her bachelor of art from California State University at Los Angeles in 1999.  Today, she is a full time artist working in a variety of mediums from her studio in Covina, California.  Her work has been exhibited throughout California, and in Chicago, New York, San Antonio and Mexico.